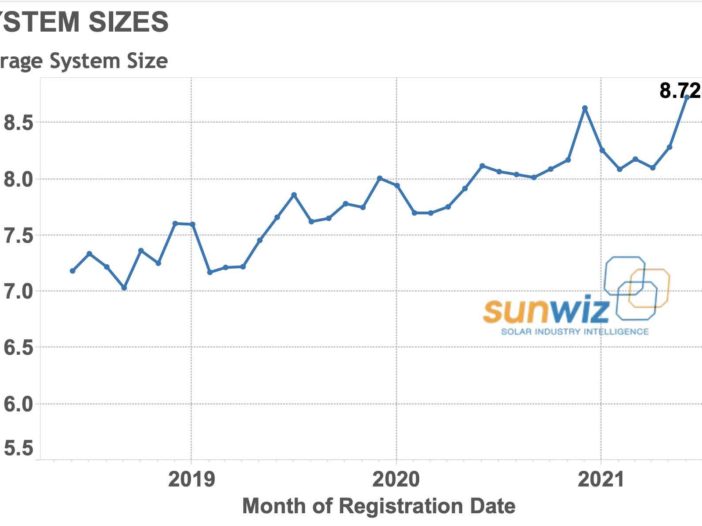 Australian households are going big on solar in the rush to install before the end of the 2020-21 financial year, pushing the average size of rooftop systems around the country to a record high of 8.7kW.

Industry statistician SunWiz said in its latest monthly report on the state of the nation’s rooftop solar market that 282MW of small-scale systems under the size of 100kW were installed over the month of June, bucking market predictions of a decline in activity by just a 2 per cent rise over May.

This keeps Australian on track to deliver a new annual installation record of around 3.5GW, with the current tally for small-scale solar installed sitting at 14.8GW for 2021 so far, roughly 23 per cent ahead of this time last year.

Leading the way on installations is NSW, which notched up another 87MW of rooftop solar installations for the month, taking the state to a grand total of 3.8GW of capacity and bringing it within reach of the so-called “sunshine state,” Queensland, which added 74MW for a total of 4.07GW.

Victoria added 58MW in June and now has 2.9GW of rooftop solar, while Western Australia added 30MW to take it to 1.8GW. South Australia, where rooftop solar has at times accounted for 100 per cent of state demand, added a further 23MW for the month, taking it to 1.65GW installed in total.

Small commercial growth was also a feature of the month, with “a dramatic increase in capacity installed within the 15kW to 100kW range,” according to Sunwiz director Warwick Johnston. Victoria was “particularly strong” in the 30kW to 100kW market, Johsnton added.

Did you miss our previous article…
https://www.narecsolar.com/?p=382